Travel Series: Getting Lost In Paris 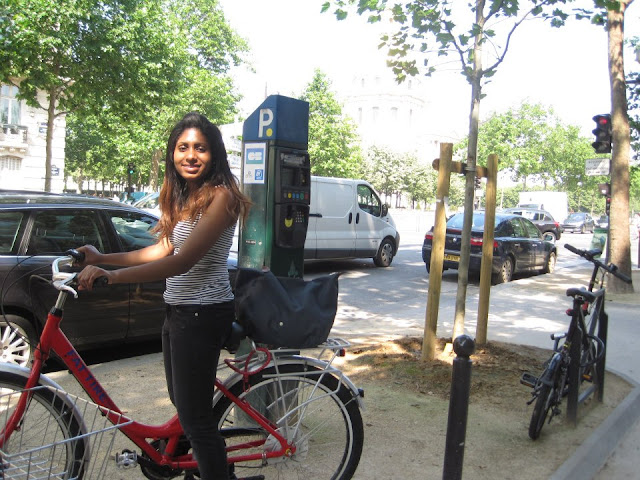 I got lost in Paris once. It all started with a bike tour I decided to join. Thinking back now, it's strange that I decided to ride a bike in Paris considering that I am too afraid to ride a bike in Toronto. In fact, the thought of riding a bike in Toronto sends chills up my spine. But I suppose when one is traveling, courage and a sense of adventure begin to emerge...and so a bike tour I will go!

The bike tour started out a bit rough at first. Rule Number One: Never ever wear a pair of new jeans that you put on for the first time before attempting to ride a bike. They were so tight! I could barely sit down on the bike. Had I known earlier in the day that I would be taking a bike tour, I would have worn something more comfortable. So, I had to deal with my new tight pants.

Once I started riding on the bike, things were pretty good. I was biking with a pretty big crowd so I didn't feel too nervous. I noticed the group seemed to enjoy riding fast, so I tried to stay in the middle of the pack and take in as many beautiful sites at the same time. Periodically we would make pits stops at historical landmarks or buildings. While we stopped to take in the scene the tour guide would give us some background of the location and then we would get back on our bikes to head to the next location. 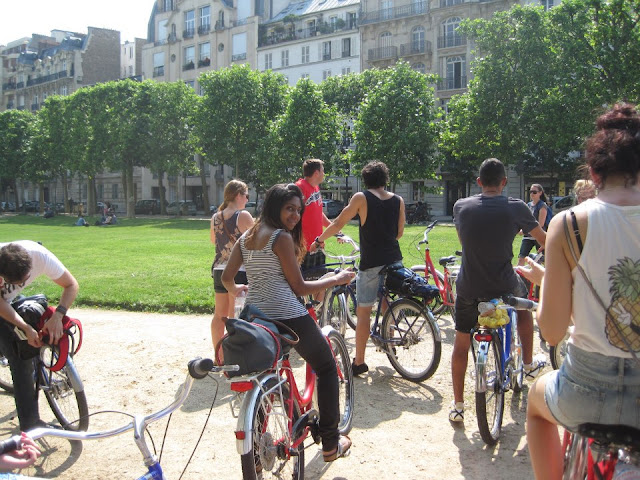 By the time I managed to get back on the bike, I noticed that most of the group had already rode off. Honestly, they were riding so fast, it was is if they were in the Tour Du France. Although I tried to catch up with them, I was unable to meet them as the traffic lights changed to red. I decided it was best to stop and wait for the light to change so I could catch up with them.

Luckily, I was with four other girls so I was not all by myself. When the traffic lights changed to green, we began to ride to catch up with the rest of the group. As we rode down the street, we noticed a cross-section. Both streets looked empty! One of the girls suggested we make a turn. We listened. I guess it was the wrong street since our bike tour was no where to be found. That is when it dawned on me that I was lost in Paris!

Initially I was a bit upset. I couldn't believe that the group rode off without all of us. If I was by myself I probably would have panicked, but thankfully I was with four other girls. As I continued to think about our situation, I began to feel a small thrill take over me. We could explore Paris as we find our way back to the group. Perhaps it didn't have to be such a nightmare.

Obviously everyone was in shock and was reacting differently to the situation. One girl kept swearing. She was really upset. I turned to the other girl beside me who didn't seem too bothered and said she was looking forward to an adventure. I quietly agreed. The two other girls seemed primarily focused on finding their way back.

As we rode lost in Paris for a few minutes, one of the girls tried to get a hold of one of her friends who was on the same bike tour with us. I suppose she didn't realize her friends were separated from the group until later. Eventually she picked up her phone and was able to communicate with us and the tour guide to help us find our way back.


After riding around Paris for a few more minutes, we found our group! Although, I didn't mind riding around for a bit, I was happy to see them all. 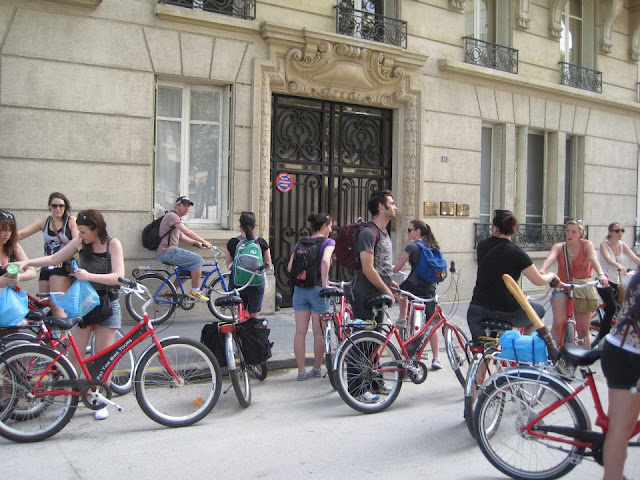 I know this story, may be a bit nerve wrecking, but honestly it was one of my most memorable and exciting memories in Paris. I rode a bike in a foreign country. I was terrified and I conquered a fear. It was such a great experience to ride on the streets with other cyclists and view all of the sites. And although I got lost for a few minutes, it was somewhat of a small adventure for me. I learned so much on the tour overall. My tour guide was great, despite the situation. Honestly, I had such a great time riding around in Paris, that I tried to rent a bike in the next city that I visited.

Thank you for reading! I hope you are enjoying my travel series. Stay turned for another post on my Travel Series.

Have you ever been on a bike tour before?